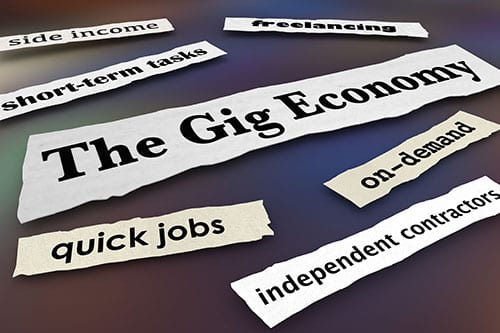 The recent presidential election has increased awareness of possible upcoming changes in the tax system for both business and personal tax returns. However, there have been discussions in the government and the IRS for several years about the dramatic growth of the gig economy and possible changes in the way taxes are levied and reported by this growing army of remote workers, freelancers, or independent contractors.

Whether your business is a freelancing or independent contracting structure, or you own a business that is using these gig workers, ongoing discussions in government taxation entities are looking at changes that will impact you. Unfortunately, changes in tax regulations and procedures rarely mean lower taxes or costs for either the gig worker or the business that hires them. Fair warning comes from the title of a report from the U.S. Treasury Department: “Expansion of the Gig Economy Warrants Focus on Improving Self-Employment Tax Compliancei”

If the title is not scary enough, here is a quote from the report: “For TYs 2012 through 2015, the IRS did not work cases involving approximately $12 billion of payments reported on Forms 1099-K by the nine gig economy companies, but the gig economy workers had potentially not reported these payments on their tax returns. As the gig economy grows and there is less reliance on traditional employer tax withholding responsibilities, a strategic and effective plan to address tax compliance in this sector is essential to keep the IRS from falling even further behind.”

Here are some of the key findings from that 58-page report as posted by TaxFoundation.orgii:

As a summarization of these takeaways, the discussions cover improving the federal tax system for gig economy work to include:

Note that everything you read here is about increasing costs for business and higher tax receipts from workers.