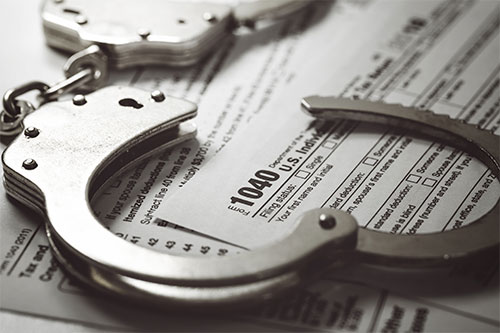 The IRS began counting down their top 10 criminal investigations cases for calendar year 2021 on Twitter on January 3rd. The list could be a reality TV show or made for TV movie, with everything from a Ponzi scheme to payday loan fraud. Here are the 10 cases as counted down by the IRSi:

William and Susan Harris from Albuquerque, NM were sentenced to 15 years and 47 years respectively in federal prison. They stole funds from a nonprofit organization that provided guardianship, conservatorship, and financial management to people with special needs.

John Piccarreto Jr. was sentenced to 84 months in federal prison and ordered to pay $19,842,613.66 in restitution for conspiracy to commit email fraud and filing a false return to obtain money through an investment fraud Ponzi scheme.

Petra Gomez and her sister Jakeline were sentenced to eight years and four years in federal prison, respectively. Their tax preparation business in Florida filed more than 16,000 false tax returns for clients from 2012 to 2016 that resulted in a $25 million loss to the IRS.

Oleg Tinkov, aka Oleg Tinkoff, renounced his US citizenship to conceal large stock gains that were reportable to the IRS after the company he founded became a multi-billion dollar publicly traded company. He was sentenced to pay more than $248 million in taxes, time served, and one year of supervised release.

Hugo Sergio Mejia was sentenced to three years in federal prison and required to forfeit all assets derived from running an unlicensed business. The business exchanged at least $13 million in Bitcoin and cash, often for drug traffickers. He established other companies to hide commissions he charged.

Bulgarian national Rossen G. Iossifov was sentenced to 121 months in federal prison. He participated in a scheme where online auction and sales websites like Craigslist and eBay falsely advertised high cost goods (usually vehicles) that did not exist. When victims submitted payment, it was converted to cryptocurrency and transferred to foreign money launderers.

Kent R.E. Whitney, ex-pastor of the Church of the Health Self, was sentenced to 14 years in federal prison and $22.66 million in restitution to victims defrauded of $33 million. He orchestrated a church-based investment scam to lure them to invest in church entities.

Joel Tucker will spend 12 years and six months in federal prison and pay $8 million in restitution for selling false information or fictitious debts to payday loan businesses and not filing federal tax returns for multiple years.

Jeff Carpoff, owner of California based DC Solar, was sentenced to 30 years in federal prison and forfeiture of $120 million in assets for victim restitution. He created a Ponzi scheme to sell thousands of mobile solar generator units that did not exist.

The Ayvazyan family used stolen and fictitious identities to submit 150 fraudulent applications for COVID relief funds based on phony payroll records and tax documents to the SBA. They used the funds received to purchase precious metals, luxury homes, and more. The family received sentences ranging from 17.5 years in prison to 10 months of probation for their crimes. Prior to sentencing, they cut off their ankle monitors and are now fugitives.